Henri Aubard is the founder of a family business that has become a true pillar of Basque charcuterie today. Born in 1946 in the Saint-Esprit district, the Aubard house is – three generations later – in the hands of the grandson: Cédric Bergez. 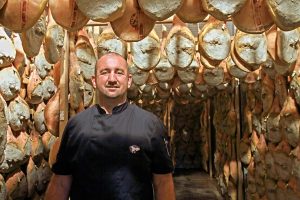 This former professional rugby player, converted into a butcher in 2009, honours Aubard by winning the gold and silver medal at the prestigious 2017 general agricultural competition. This award reflects the excellence of the quality of the deli products. The latter specializes in fresh pork and ham.

His strength? All production is done on site to ensure consumers a unique quality and taste. Aubard processes its products, such as Bayonne ham and Kintoa ham, in accordance with local traditions.

Concerned to pass on his passion for charcuterie and his craft skills, Cédric Bergez decided to open a ham museum in his Bayonne store. Presentation of a family business with strong values in the Basque Country.

The only artisanal Bayonne ham produced in Bayonne

Aubard puts all its heart into producing its own famous Bayonne hams. The manufacture of ham is done in accordance with local and artisanal traditions to preserve the authenticity of the taste for more than 70 years!

Pigs born and raised in the Basque Country

In concrete terms, this certification means “geographically protected indication of the European Union”. Simply put, hams must be produced locally to obtain this indication. In our case, it is necessary that they be produced around the Adour basin. The company then demonstrates its willingness to work in a local area.

In addition, Cédric Bergez has chosen to work only with producers in the Basque Country. In this way, it supports local agriculture and the agricultural heritage of its region. Pigs are raised in the wild. Farmers are also keen to raise pigs in good conditions to obtain quality products.

Supporting local agricultural activity is therefore one of the fundamental values of the family business. Local pork producers are not the only suppliers to Aubard. The latter collaborates with salt and Espelette pepper producers to improve the taste quality of its sausages.

Aware of current environmental issues, Aubard delicatessen wishes, even more so today, to act only at the local level. This strong geographical involvement means that it does not have too high transport costs and, above all, it does not have a too strong ecological impact.

Finally, Aubard is strengthening its local activity by creating boutiques for local consumers. The latter are now located in Anglet, Bayonne and Biarritz, which are sources of employment for these cities.

The company’s willingness to get involved at the local level is particularly strong. Delicatessen is also present at every important event in the Basque Country, such as the Bayonne Ham Fair.

A respect for artisanal techniques

The artisanal quality and ancestral know-how are respected throughout the production by Aubard.

The drying method used today is identical to that used by the founder of the sausage company at the time. The objective is to ensure that all family craft traditions continue over time. Aubard uses drying chambers that reproduce the temperatures of each season and the humidity conditions of the Basque Country.

The next step is the salting of the Bayonne ham pieces. To respect the willingness to work at the local level, Cédric has chosen to collaborate with a salt producer in Salies de Béarn. This commune is located less than an hour from the city of Bayonne.

The hams are then cured in the open air to give the meat different and unique flavours. The end of this stage is marked by the inscription of the Basque cross on each piece of ham with the name “Bayonne”. These distinctive signs ensure the quality and especially the origin of the ham.

It should be noted that Bayonne ham is sold after 12 months of maturing and not before to give it the maximum taste. The most beautiful pieces can be expected for 18 months. The duration of maturation therefore depends on the desired taste and flavours. This is a well-known expert’s work that is well known and mastered by Aubard.

The different family generations have been able to pass on and preserve their know-how from generation to generation. It is certainly for this reason that Aubard is the last delicatessen in Bayonne to produce all its own production!

Today, Cédric Bergez no longer has to prove the quality of his products in view of a particularly strong family heritage. However, the specialists in charcuterie still confirm today the immense work carried out by its teams, notably with the award of the gold medal and agent of the general agricultural competition in 2017. This award attests to the quality of Aubard’s products.

The Basque Country has its own breed of pig: the Kintoa.

Easily recognizable by its black colour, this pig is now raised in the Basque mountains. Deli lovers know perfectly well how to recognize the special taste of this ham. Nevertheless, to obtain it, farmers and then producers must scrupulously respect local traditions.

To make an excellent Kintoa ham, you need to have a great local know-how.

Aubard is particularly proud to offer this exceptional product to its consumers on a daily basis. Raised in the heart of the Basque Country, these pigs are a true reflection of respect for Basque culture.

The production line is managed by two prestigious labels:

This first label makes it possible to identify all the stages of production of the product carried out in the same geographical area. To obtain this label, it is important to respect precise specifications and to follow particular human traditions.

This label is awarded to a product when genuine know-how is recognised in the same geographical area. It is a Europe-wide recognition that protects the name of the product.

Kintoa ham now has these two labels. They ensure consumers the high quality of the product.

The hams are prepared in accordance with the oldest traditions of the Basque Country. The production line is also meticulously traced step by step.

Having the opportunity to develop and produce Kintoa ham is a great source of pride for Aubard. It is particularly proud to be able to offer quality Basque products to its customers.

To obtain such a result, it takes a lot of patience on the part of the producer. Indeed, the maturing period is quite long. It takes 20 months to sell your Kintoa ham. Patience is therefore the watchword to obtain in the end this particular taste in the mouth!

During this maturing period, the hams are checked to ensure that the process is running smoothly. Thus, Aubard confirms the quality of these products with Kintoa ham. A product that represents the values of the house particularly well: a local product designed in accordance with traditional craftsmanship.

The particularity of Kintoa ham is felt in every bite. Lovers of quality deli meats know how to recognize a Kintoa ham. This smoky taste with aromas of nuts and roasted spices is obtained, in the first instance, from the food given to the pigs during their growth.

The breeding is done in the mountains of the Basque Country. Pigs feed on forest products in the middle of nature. They usually find acorns or chestnuts. They are therefore not fed industrially.

Farmers let nature do its work to obtain quality meat. Animals are not stressed in their daily lives because they live in a wild and natural environment.

Today, the area dedicated to Kintoa in the Basque Country covers 360 hectares, including 138 hectares of forest. The forest is precisely the ideal place to ingest many resources that then give the meat its character (hazelnuts, herbs, acorns).

This particular way of life gives an equally strong result in terms of taste. Kintoa meat can be recognized quickly in the mouth. It is particularly juicy and tender and the aromas released are exceptional.

They are also enhanced by the Espelette chilli pepper found on the edges of the ham. The colour of the meat is easily recognizable by its dark red appearance. It is contrasted by the white grooves in the fat of Kintoa ham.

It is for this quality and love of the product that Cédric Bergez continues to perpetuate the ancestral know-how of his delicatessen.

Cédric Bergez wishes to pass on his love for delicatessen and good products. It is for this reason that he decided to open a Ham Museum in his second shop in Bayonne.

A visit not to be missed in Bayonne

The city of Bayonne would be nothing without its delicatessen. The love for charcuterie in the Basque Country is not a myth. It accompanies most traditional dishes to become an integral part of the local heritage. Indeed, every event in the Basque Country cannot be successful without a little cold meats.

The famous “Talo” are eaten with bellyache and sheep’s cheese. In Basque, it is possible to hear “talo xingar eta ardi gasna”. As an indication, the “x” in Basque is pronounced by the sound “ch”. This recipe animates most of the events in the region in a very friendly way. These Basque pancakes can be enjoyed on the go with family or friends.

Aubard is also present at major events in the region, including the famous Bayonne Ham Fair. This is an excellent opportunity to come and discuss with local producers who are involved in the development of deli products. You can also come and taste Aubard’s products such as hams and other local specialities.

A word of advice: if you want to go to the Fair, don’t miss the famous ham omelette!

All this information can be explained within the museum to be informed of the latest local news. To find your way around, the museum is located a stone’s throw from the town’s Halles, on the “Grand Bayonne” side.

Understand the history and know-how of Aubard

The visit allows the curious to know the history of the Aubard house since 1946. It is also particularly interesting to understand the breeding and production of ham in the delicatessen.

All the steps carried out by Aubard’s teams are explained: drying, maturing and sale of hams. This visit can then inspire vocations for some people. For amateurs, a tasting is planned at the end of the visit. An important additional detail: the visit is free of charge!

During this discovery, you should not hesitate to ask the specialists at the Aubard boutique for advice. For example, they can tell you the best way to keep your ham on the bone after a purchase. It is always useful to know what actions to take to maintain the meat’s flavours as much as possible.

Cédric Bergez – founder of the museum – wishes to be able to transmit to the public his passion for charcuterie while respecting local traditions. Exchange and transmission are at the heart of the Ham Museum’s activities. Through the latter, Aubard also leaves a trace of its strong family history in terms of know-how.

In short, Aubard can be summed up in a few words:

Cédric Bergez succeeded in making his ham a top-of-the-range product. The quality of these products is therefore no longer to be proven today. It has become a real reference in terms of taste that should not be missed during a visit to the heart of the city of Bayonne.