Defective New House : Let’s support this family who are victims of a defective job…

Lionel and Géraldine Labesque obtained the conviction of the contractor and his insurance company for the defective work on their house, built in Messanges. Problem: the people involved are insolvent. Frédéric Gauthier, a construction expert, invites you to support this French couple from Landes.

Lionel and Géraldine Labesque seem to have taken a turn. As if, after two years of struggle, sleepless nights and repeated movements, they had managed to find some inner peace:

“We have lost all hope of ever seeing our money again. We understood that our situation was going to be the same as that of many people. And when we learned a few days ago that on September 15, the French who had employed the construction companies insured by Elite Insurance were going to have their contracts cancelled, we said that the damage caused went far beyond our particular case. We are launching a pool on the Internet to try to continue the fight, but we know that it will not be enough to cover all our costs. However, we still want to live in this house, which we have built and we had to give up six weeks to move. »

The beams are sinking

The couple and their three children were initially the victims of a rather indelicate Palois businessman. I come from Vieux-Boucau,” explains Lionel Labesque. We bought our first house in 2007 and sold it in 2018, as we were in the process of having the new one built in Messanges. “It is an eco-designed house, made with natural materials that are 100% recyclable. Modern, spacious, this house “was also the project of a lifetime. But on May 8, 2018, we discovered that there was a big problem. »

That day, the ceiling beams collapsed for two reasons, according to the experts’ report: first, metal shoes were missing and the beams were not installed “according to the rules of the trade”.
The editors advise

But that’s not all. On the roof, which is flat and covered with gravel, the tonnage is not adequate: 16 tons are overloaded.

“We found out that we were not even among the creditors, in the liquidation file.”

“The next day, the contractor wanted to repair, but the roof was sinking. We called an expert, at our expense, to tell us what to do. “And his answer is clear: We had to stop everything, it was dangerous. We had to take a safeguard measure. »

Thus, the house will remain in the same condition for two years, continuing its deterioration over time. On the doors of the rooms, the names of his three children were already inscribed. “We were ready to move in. Of course, we had left our old house, which was sold. »

The insurer based in Gibraltar

During the first months of the forensic expertise, the family moved to live with Lionel’s mother in Vieux-Boucau. “In December 2019, the criminal court of Dax ruled in our favour and condemned the company and the builder’s insurance to compensate us for the destruction of the house and its reconstruction, i.e. 506,000 euros. »

Except that, a few days before the hearing, Lionel Labesque discovered that the builder’s insurance company and the design office were being liquidated:

“The ten-year guarantee insurance, the Elite insurance, active in France on the principle of freedom of services, was based in Gibraltar, while on paper, the address was in Paris. We discovered that these contracts, authorised by the Bank of France to work in the territory, did not have a collection fund. »

In other words, neither the builder nor the contractor are in a position to pay. “We found out that we were not even among the creditors of the insurance company’s liquidation file. “As for the builder, he put his company “on hold”, while continuing his activity through other companies. 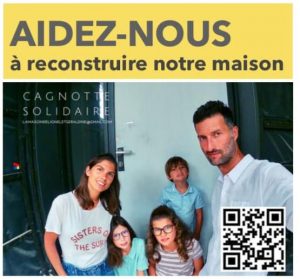 Since then, the small family has been living in borrowed houses, houses to keep for the holidays, and so on. “We both work, we both make a good living, but we can’t afford to pay back a new loan to make repairs and finish the job. The banks don’t want to hear anything that helps us. We could only postpone the loan for a few months. “On top of that, there are legal fees, translation of documents, which have already cost over 30,000 euros so far.

Since then, Lionel and Géraldine Labesque have tried to contact everyone, from the Landes Prefect… to the President of the Republic, through various local elected officials. “In a fortnight, we have raised 15,000 euros, thanks to our online boat, it is already enormous to see the solidarity that is being built around us. “Pending the deliberation of a new sentence on appeal of the case, which should take place in a few days but should only confirm the insolvency of the defendants, Lionel and Géraldine continue their struggle.