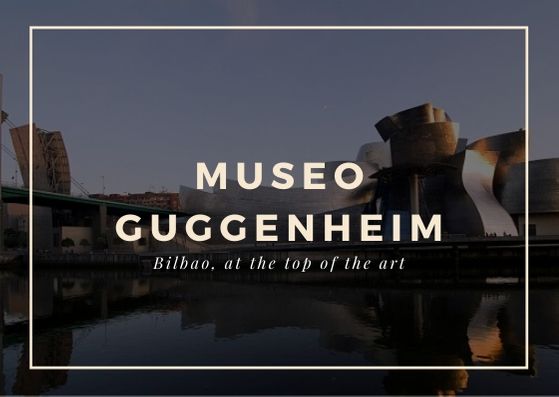 The architecture of the Guggenheim Museum Bilbao and the Iberdrola Tower

News and Events : https://www.guggenheim-bilbao.eus/en/activities
If you are interested in art and architecture, the Guggenheim Museum in Bilbao is an essential reference, an icon of contemporary aesthetics and the emblem of the Basque city. 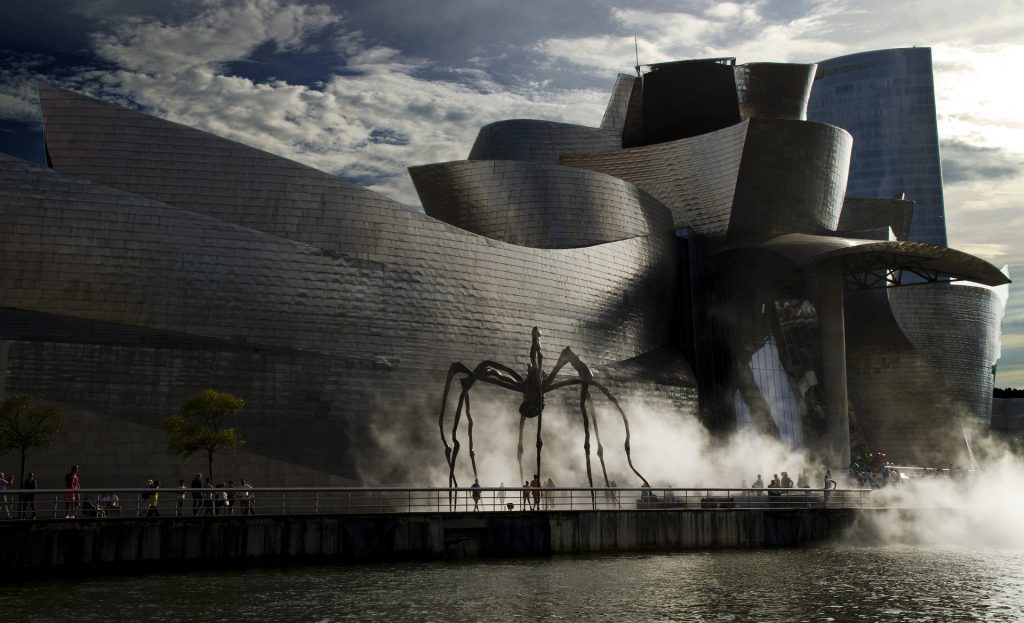 Why such a museum in… Bilbao?

A pioneer in this field, the S. Guggenheim Foundation sought to develop by creating an antenna (cf: Centre Pompidou Malaga) and prospected in Europe in order to establish a little brother to the New York museum. Bilbao was then a declining port city. The elected architect, Franck Gehry, explains:

“The objective was to create a building with a strong identity. The museum had to allow the inhabitants to reclaim the city. He had to turn the page on the industrial period and no longer flee Bilbao like previous generations. They needed to be given a sense of pride again. The museum was to be a monument. The Guggenheim Museum in Bilbao will be built on an industrial wasteland (between 1993 and 1997) and since then the industrial city has become the city of a cultural monument and, just for him, attracts many cultural tourists like me! This is called the “Guggenheim effect” and resonates throughout the city with other contemporary buildings with bold architecture” (see: Zubizuri by Santiago Calatrava).

In designing the building, Frank Gehry had an urban project: he covered the railway track to make it a square open to the city, a crossroads between the museum and the city. On the Nervion side, the footbridge over the basin gives the illusion of flying over the river. The banks have therefore become a place of strolling where the Guggenheim Museum is exposed to contemplation. This impression of movement that Gehry gives to his buildings aims to revitalize the city, to breathe life into it.

In the “professional-passionate” context of mine, I had already spent a lot of time discovering the surprising architecture of the building, looking at it, dissecting it and manipulating images: I had learned that Frank Gehry’s first drafts had been semi-automatic sketches that took the form of a moving fish. The architect then translated his drawings into volume by interweaving the shapes like a puzzle and distorting the material like a sculptor. The Guggenheim Museum in Bilbao is therefore a kind of sculpture that has become monumental, abstract and chaotic in appearance, emblematic of deconstructivist architecture. The level of the museum is below that of the city and to play monumental, Frank Gehry has created an external volume almost twice as large as the internal one (the galleries). To get a better idea of the scale, imagine yourself in beautiful Bilbo the Hobbit in Bilbao. However, the building does not exceed the surrounding building mass.

Despite its appearance, which seems to come from elsewhere, the architecture of the Guggenheim Museum is closely linked to the site where it was built. The building even acts as a sort of tumultuous transition between the city and the river: on the south side, the building takes up the architecture of the city with its right angles, aligned windows, minerality… While on the north side, it takes up the undulating lines and fluid forms inspired by fish, the reflections of the river’s surface.

The titanium “skin” is the identity of the building. The 33,000 folded and slightly curled leaves accentuate the movement and capture the light. “I spent a lot of time trying to understand the light of Bilbao. The steel at first didn’t give anything back with the light of the region. The metal seemed dead in the grey sky. But by chance, we discovered that Titanium lived very well with this light. If you visit Bilbao, I advise you to come back at different times of the day (even if only before and after the visit to the museum) to see the play of light on the walls”

Opening hours: 10am – 8pm (closed on Mondays, except in summer and exception)
Entrance ticket price: 13€ for an adult (audioguide included)
Possibility to buy your ticket online here: https://tickets.guggenheim-bilbao.eus/en/

Once inside and past the lobby with the ticket office, the “cave” is breathtaking! In the atrium, the materials are in opposition (metal, glass, stone, white concrete…) and the volumes stretch and twist like in a living haunted house. The elevator and staircase tower are reminiscent of Frank Gehry’s The Dancing House (1996) in Prague. The Atrium is a bright space, open to the river, a hybrid between inside and outside (like the Centre Pompidou). Gehry applied the same principle to the Louis Vuitton Foundation in Paris.

The Atrium is the very centre of the building and the 20 gallery rooms are distributed around it, connected by footbridges and stairs. The rooms are all different from each other. On the other hand, it is impossible to take pictures inside the rooms and that is absolutely unbearable! The guards act rather unpleasantly (probably also irritated by the repetition of the exercise of their mission). The only few places where this is possible are marked with a “photo point” on the ground… Or how to treat the visitor like a Disneyland sheep… even conditioning him to the place where he can take pictures! As scary as it is contemptuous. It was a deliberate choice of the museum since I had visited the same Koons exhibition at the Centre Pompidou a few months earlier and everyone could take all the pictures they wanted without being scolded like a poorly educated little boy.

Due to their circular shape, some corridors refer to Frank Lloyd Wright’s Guggenheim Museum in New York. Throughout the route, the footbridges offer a plunging view of the lower spaces as well as multiple “windows” on the outside (notably the city but also on the titanium plates) thanks to the glass façades. As a result, the visit is much lighter and more pleasant (the sequence of works is not as dense as at the Musée d’Orsay for example).

Yes, because we would tend to forget that it is when an art museum and that (normally… we come there first to see exhibitions; but we have to admit, the museum is a work in its own right and, here, it is probably the star!). Who says Guggenheim, says mega historical collectors mega internationally renowned mega collectors! Solomon R. Guggenheim, a wealthy American industrialist, was an art collector and patron (foundation created in 1937). Not surprisingly, the permanent collection of the Guggenheim Museum is made up of works by major international artists such as Robert MOTHERWELL, Anselm KIEFER, Andy WARHOL, Julian SCHNABEL, Georg BASELITZ, Jean-Mimi (BASQUIAT)… We also find great names in contemporary Spanish art with Miquel BARCELO, Antoni TAPIÈS, Juan MUÑOZ, Eduardo CHILLIDA, Cristina IGLESIAS, Javier PEREZ, José Manuel BALLESTER… Jenny HOLZER has invested a niche in the atrium with her Installation for Bilbao (1997) which plays with space with a red and blue light curtain. Jeff KOONS’ Tulips (1995) and Eduardo CHILLIDA’s Étreinte XI (1996) remain on the terrace. The immense room houses Richard SERRA’s monumental installation La matière du temps (1994), which is the museum’s emblematic work and whose experience of the loss of balance and physical landmark is sensational!