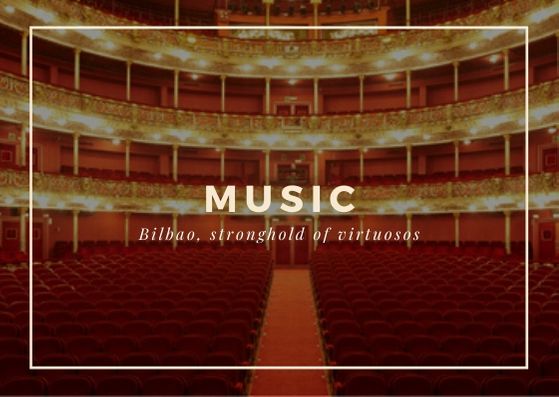 Jazz and Classic Music in Bilbao

Music has a privileged place in the world of Basque culture. Oral tradition has left us authentic treasures, handed down generation after generation by bards and poets. The oral facet is particularly well known, expressed by the sentence: “one Basque, one beret, two a part of a ball, three an orphéon”.

From 1960 onwards, modern Basque music appeared with artists such as Mixel Labegerie, then Ez dok Amairu, and the folk sound, in which Oskorri and Mocedades stood out. Concerning the integration of traditional instruments, we can mention Kepa Junkera, with the trikitixa (diatonic accordion), Grammy Latino prize for the best folk album in 2004. Pop rock, led by Itoiz, and radical Basque rock are other sounds that complete the musical evolution.

The Teatro Arriaga is a surprisingly beautiful building. Inspired by the Paris Opera, it is the work of the municipal architect Joaquín Rucoba and was inaugurated in 1890. In 1902 he was given the name Arriaga in homage to the Bilbao musician Juan Crisóstomo Arriaga, known as the “Spanish Mozart” because of his talent (he composed his first opera at the age of 13 and died of tuberculosis shortly before his 20th birthday). Nowadays, the Arriaga Theatre permanently hosts the city’s theatrical and musical programming. Like other buildings in downtown Bilbao, it suffered severe damage during the 1983 floods.

Azkuna Zentroa is not only one of the city’s most emblematic buildings, but also an innovative cultural and leisure space, thanks to a varied offer for all types of audiences and the only European centre to have won the “Global Awards for Excellence”, which rewards best practices in all types of property development.

Its 43,000 square metres extend inside an old wine warehouse in the city, which designer Philippe Starck has transformed into a huge container that can accommodate the unimaginable: exhibitions, concerts, conferences, children’s workshops, all kinds of physical activities, a reading area, cafés, restaurants, shops, a 2,000 m2 ground terrace that serves as a solarium in summer and an additional space in winter, cinemas…

Another of its great attractions is an avant-garde swimming pool with a transparent floor where you can take a swim and sunbathe on the 2000 m2 sun terrace, which in summer serves as a solarium and in winter as a complementary space. You can’t miss visiting Alhóndiga Bilbao.

The Euskalduna Palace, or Palace of Congresses and Music, was the second building built in the urban area of Abandoibarra after the Guggenheim Museum Bilbao. Inaugurated in 1999, it was designed in Corten steel by architects Federico Soriano and Dolores Palacios as a symbol of the last ship built in the former Euskalduna shipyards, which occupied this space decades ago. Today it hosts a programme of concerts, operas and theatre. 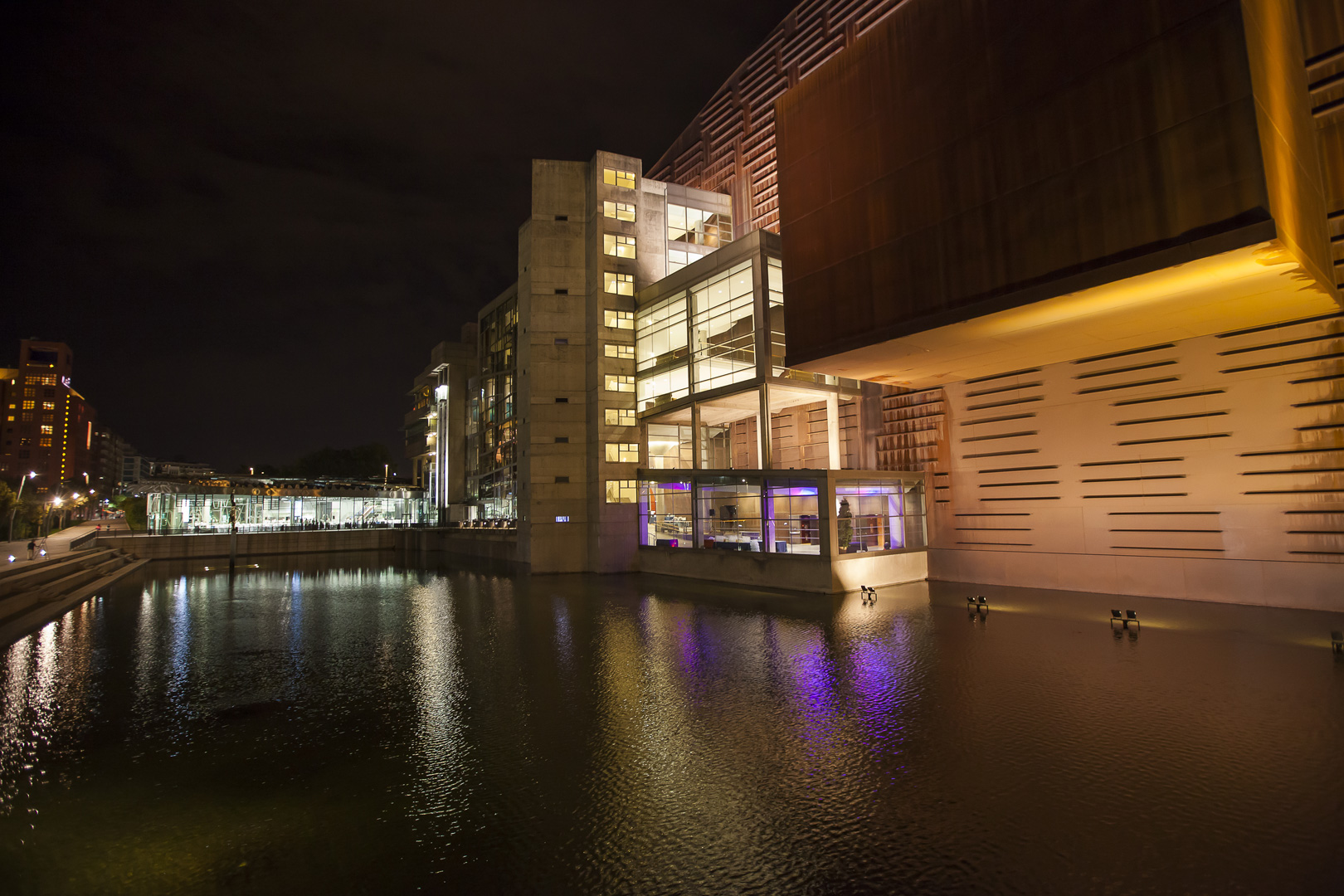 Located in a 17th century religious temple (the church of Merced) Bilborock is today a place of avant-garde and social and cultural meeting of reference for young people. The concert hall schedules concerts and organizes the Villa de Bilbao pop-rock competition, aimed at young European groups, which already has 25 editions. Thanks to its multifunctional nature, it hosts activities such as cinema, theatre, dance, installations, experimental laboratories, conferences and presentations. The multi-purpose room of this establishment, subsidized by the Bilbao City Council, has a capacity of 300 people seated and 500 standing.

The Bilbao Fair opened its new headquarters in April 2004 under the name of Bilbao Exhibition Centre, the most innovative exhibition centre in Europe. Its main vocation is to serve the entire Atlantic area, it has been designed and built according to the latest trends in the sector: modern construction projects, technologically advanced and better adapted to the needs of exhibitors and visitors, privileged access.
Located in Ansio, a district of Barakaldo, the building is divided into six pavilions, four of which are 15,000 m2, one of which is 21,000 m2 and the other with the same surface area, but with special conditions and which can be used in a versatile way: the Arena Pavilion, where all types of shows and concerts are organised. The total exhibition area is 150,000 m2.
The building also includes an 18,000 m2 convention centre, a shopping mall and a hotel. This multi-purpose centre has several offices, VIP rooms, meeting and conference rooms along the Atrium, which connects the pavilions to each other, a press room, several restaurants and all the services needed to organize meetings and activities of all kinds.

The Hacería room is a space located in a post-industrial area, such as the Ribera de Deusto and Zorrotzaurre district, which functions as a creative factory to “make” a critical culture, art and cultural industry. It is composed of different thematic clubs (theatre, jazz, flamenco, English…), which disseminate and generate a formative and playful activity, giving meaning to the spirit at the origin of its creation. Behind this space, which can be accessed, is “Hacería Arteak”, a non-profit cultural association founded in 1997, born of the artistic needs of recent drama graduates from one of Bilbao’s performance schools.

If there is one aspect that defines this modernist building designed by the architect Alfredo Acebal in 1902, it is its magnificent Art Nouveau façade, the work of the Franco-Basque designer Jean Batiste Darroguy. Because of its unique façade, this theatre, classified as a Monument, has always been called “la bonbonnière”. In 2010, the Théâtre des Champs Elysées was inaugurated again, after a renovation carried out by the Bilbao City Hall and the Société Générale des Auteurs (SGAE). Today it is a modern space, with a capacity of 800 seats, offering avant-garde scenographic and technical services.

This bar is a classic Bilbao bar, opened in 1994. Its stage has welcomed many groups, with a very active musical program. Cosy and well decorated, the place is frequented by customers between 20 and 50 years old, even if the concerts are especially appreciated by the thirty-somethings. The music changes depending on the DJ, but generally varies between the 80’s or 90’s, both commercial and independent.

Caos The New is a nightclub in Bilbao where you will find an unbeatable atmosphere to enjoy nights of fun and good music in a room with an eclectic and very modern design.
Here, you can enjoy combinations and beers to the best electronic music of the moment to dance with DJ’s known in the music scene. A perfect opportunity to dance until late at night in a very pleasant and relaxed atmosphere.